I’ve received some inquiries from social media about why I pulled the fuses out of my K16A-B controller for our megatree and how it is wired.

This year we had planned on going from 2″ spacing on the megatree strips to 1″ spacing. Going from 75 pixels per strip to 150. We also added 8 more strips for a 32 strand tree. I re-designed the K16A-B controller box for this. This requires four PSUs (Power Supplies) to run the whole tree, instead of the original two. Later in the season we abandoned 1″ spacing for this year, but I went ahead and re-did the K16A-B box anyway to accommodate 1″ spacing in the future.

And then, there’s more:

Another consideration is pixel data is based on negative/ground, so all pixels being driven from the same controller need to have their negative (-) ports tied together. This is done internally on the K16A-B for the two PSUs it supports. For our four PSUs- I have tied all the negative ports together in the controller assembly through a bus, as well as via wiring and the controller itself.

What CAN’T happen is to have the positive (+) terminals from different power supplies connected together. This can cause the voltage regulators in the PSUs to fail, in some cases spectacularly, by “letting the magic smoke out”! Some PSUs can handle this, but the Mean Well and similar industrial supplies many of us use can’t. So- we can’t just connect two power supplies together for each side of the K16A-B, and we don’t want to risk such connections “in the field” when assembling the tree.

So, long story short, we can’t just power the whole tree directly from the K16A-B ports.

We also have to consider the power injection needs of the pixels. They have extremely thin wiring, and because of that and the voltage drop over a distance of wire, we need to add power after a certain amount of pixels. For 5v systems like ours, the rule of thumb is to have no more than 50 pixels between injection points, or roughly one injection point every 100 pixels. (For 12v systems the rule of thumb is every 200 pixels.) We can stretch this (for our originally-planned 150 pixel strands) to 150 pixels because of the lower brightness we use. So in any case we need to power inject at the top and bottom of each strand of our tree. We need to insure that both ends of each strand are powered by the same PSU. If we were to try to provide power from the K16A-B, we would end up with positive ports overlapping.

So here is my documentation for how the tree is wired:

(You can disregard the notes about the Starburst (topper) and other yard elements, which use the differential ports on the K16A-B and have their own PSUs.)

I often refer to the negative (-) DC pole as “ground”, and do so here. This isn’t technically true, as it may not actually be a real “ground”, which by definition is connected to the Earth. This should NOT be confused with mains (AC) ground. DO NOT connect the mains (AC) ground to the negative (-) pole of any PSU. I’ve seen people do this- it’s dangerous! You can burn out the PSU depending on its design, and you can create an electrocution hazard. You may also end up introducing excessive AC noise into the data circuit.

So- two strands receive data from each port of the K16A-B, and every 8 strands are driven by a separate PSU. Because I pulled the port fuses from the controller, only ground (-) and data are sent through each port, so there is no mixing of the positive ports from the controller’s power supplies, and I don’t have to alter the typical 3-conductor data runs. An alternative to pulling the fuses would be to use two-conductor cables and just not connect anything to the positive (+) terminal of the Phoenix connectors (ports) on the controller. Because I already had 3-terminal connections built for the controller from past years, pulling the fuses was more logical. If I later decide to use the controller somewhere else and I do need to power the pixels through the port connectors- all I need to do is replace the fuse(s).

There are four 14Ga cables that run to the top of the tree for power injection for the tree itself. I’m using WAGO busses to split the power runs up for the strands. These are easy and fairly cheap to build and work great! An alternative would be actual bus bars and a LOT of extra wire, or something like big waterproof wire nuts (expensive!).

By doing things this way, I’m already set if/when we change to 1″ strip spacing, or if we build a taller tree with even more strands or pixels. We can easily incorporate more PSUs if necessary, without worrying about which PSU is tied to which the controller connection.

I hope all of this makes sense. 😊 Final safety note: FUSE EVERYTHING. 5v (in our case) may not sound like much, but it can overheat and burn a wire or circuit just as fast as higher voltages. Overheating wires or circuits can cause fires. I pulled the fuses from the controller because we don’t want current flowing through those connections, but I have all of the power injection circuits fused. 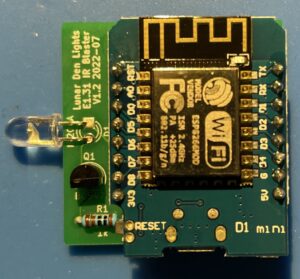 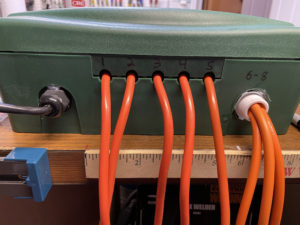